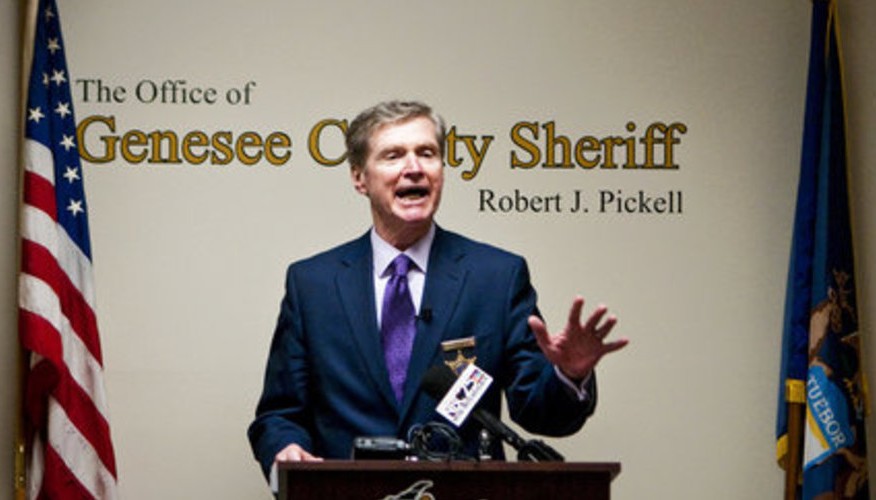 The lawsuit filed Wednesday, Jan. 25, in Detroit U.S. District Court by attorney Scott Batey alleges Pickell deputized people for $65-$300 a year, which allowed them to act as a deputy and agent for the Genesee County Sheriff’s Office and receive work as process servers.

When reached by phone, Pickell said he had not yet seen the lawsuit.

“There’s no merit to it, without looking at it,” he said. “It’s just hard to believe for $150 anybody could file a lawsuit.”

Pickell, Scott Hope, and the Allen & Hope Process Serving Management Company are named as defendants in the lawsuit alleging two violations of the federal Racketeering Influenced And Corrupt Organizations Act and one count of violation of first amendment rights.

“From at least 2006 continuing until 2016 [d]efendants annually engaged in a pattern of racketeering where [d]efendants would take and receive money not due to them under the pretense that they were entitled to the money” by virtue of Pickell’s political office, according to the lawsuit.

Checks were allegedly made out to Pickell, The Committee to Retain Sheriff Pickell, or a charity selected by Allen & Hope, described in the lawsuit as a “loosely knit business enterprise” designed to keep the sheriff in office and attack his opponents.

Copies of checks made out to Pickell and his campaign committee purportedly related to the allegations were attached to the lawsuit as evidence. Some of checks were endorsed with a signature reading “Scott L. Hope.”

“They’re typically just deputized,” Batey said when contacted by MLive-The Flint Journal. “Just last week, plaintiffs were deputized by (Genesee Circuit) Judge (Richard) Yuille. He didn’t charge a penny and there’s no problem with charging money for deputizing if the money is going to the county. But they’re acting as a political office to get money for personal gain.”

If those seeking deputy status did not back the sheriff’s political interest, they would not receive the designation, which the lawsuit claims is a violation of freedom of speech.

Hope, who said he had not read the lawsuit, said Wednesday afternoon when contacted by MLive-The Flint Journal that checks were filled out to Pickell to become deputies, but it was just a suggestion and “every dime” has been donated to a local charitable organization.

“We’d send out a letter each year with an amount,” he said. “I never remember it being as high as $300 though.”

Pickell said he was not aware of any checks and had not yet seen the lawsuit.

This isn’t the first time Batey and Pickell have went head-to-head.

Batey previously handled a 2012 whistleblower lawsuit by fired deputy Joe Boulton who claimed he was demoted, stripped of police certification, and suspended after unfavorable testimony about Pickell and staff. A jury awarded Boulton $139,000.

A federal lawsuit in 2013 filed on behalf of former deputy Gerald Parks settled for $90,000 over allegations he was retaliated against and eventually forced to retire after providing testimony critical of the sheriff’s office administration. That case was also handled by Batey.

Batey said the cases against Pickell were not personal.

“We had great success in the Boulton case and this one had merit,” he said of the new lawsuit. “The ongoing cavern of what they did there is outrageous, using political office for personal gain is outrageous.”

No court date has been set to hear the case.

What Paralegals Should Know About Process Servers

Chat now for an instant no obligation quote

Available 24/7 for our clients

Get a Call Back within 1 Minute